In this study, it was aimed to compare the root, stem and leaf anatomies of two species belonging to the Frankeniaceae family including Frankenia hirsuta, which grows naturally in Turkey, and F. salsuginea, an endemic from Tuz Gölü, and to contribute to the taxonomy of the genus. The comprehensive anatomies of the two species are examined for the first time in this study. The anatomical features of the species F. hirsuta and F. salsuginea were not indicated many anatomical features that could distinguish between them in terms of taxonomy, except for features such as periderm thickness, stem indumentum, leaf curliness, lower epidermis indumentum of the leaf. In this study, the presence of salt glands, as an important feature of the genus beside emerges as an adaptation to saline and/or arid environments, was shown, and information was given in order not to be confused with stomatal cells that it resembles in shape. In addition, it has been shown that druse crystals, an ergastic substance are present in all tissues examined. 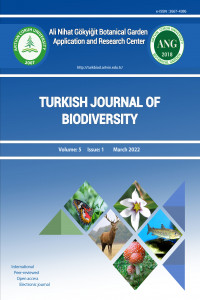